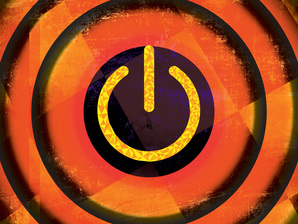 To my dear Fryz Family,

Hugs and high fives for all the smiles you have given me on and off the field, for sharing your memories, and for your appreciation expressed in emails, cards, letters, and even on video. Elana and I get teary when we hear your reflections of how Fryz has changed your lives. Now it’s my turn to thank you.

At the heart of it, Fryz started as a way for us to be with Justin and Jordon. No surprise, they are my reason for being. When they were little, I would have water gun fights with Justin, Jordon, Mikey, and Jake. I stood on the balcony above them with a hose, and they took cover below with water guns and one umbrella for the four of them to share. Guess who got wet and who stayed dry? As they got older, their interests began to change.

They were 13 and 14 years old, and I wanted to find a way to support their new interest…Ultimate. Drawing on my tennis experience, I knew coaching and a high level of competition would make a difference in skill, passion, mental toughness, winning one point at a time. Learning to put it all together on the field, how to accept hard losses, and persevere and maintain perspective was just as important. Lucky for us, the stars aligned one rainy night when Justin was in 8th grade, and he and Miranda were the only ones who came to Moho at Hamlin Park.

Miranda Roth Knowles exemplified everything a parent could want in a coach. When you entrust a coach with your child, you are essentially asking that coach to be a partner in parenting. That’s the kind of community Elana and I grew up in. We had a million parents in our friends and family. Justin, Jordon, Mikey, Jake, Natan, Khalif, Henry, Jesse, Zhi, Claire Revere, Nina, Sonja, Kirstie, Jessie, Claire Bartell and Qxhna extended our family for that very first Spawnfest in 2007. Every year after, many more helped us grow from a team of 17 to 88 this year.

Against their preference, Elana, Poa Poa and I would constantly be on the fields to watch Justin and Jordon, which I recognize came with its own unintentional pressures. And, I am so proud of them and every single Fryz member, past and present, those who have continued to play and those who have chosen to stop.

I believe part of being a good parent is knowing when to let go, a lesson I learned when Justin and Jordon left for college. I’m still learning to let go now. With mixed feelings, I have decided that this will be the last season of the Fryz and Small Fryz.

Fryz has morphed into something beyond my imagination, beyond my capacity and my passion. Sometimes there is a confluence of events for magic to unfold. That’s what Fryz has been for me, magic.

Thank you to the coaches for your passion. Fryz would not have been sustained without coaches like Miranda, Wink, Pauline, Drew, and the generation now, Shannon, Khalif, Homer, Callie, Reid, Surge, Alyssa, Charlie, Spencer and Matt, and the many, many coaches in between who taught each of us something new.

Thank you to the Fryz friends and families who organized, contributed, donated company logos, products and services, who opened your homes, cooked every grain of rice, warmed every hot cup of water, drew every ice bath, and offered every bite of jambalaya.

Lastly, thank you to Fryz past and present. Without you Fryz would not be what it is in my heart, a pile of kids in stinky orange shirts and baggy shorts, muddy cleats piled by the door, a tangle of legs, arms, and bobbing heads with smiles as wide as the sky, the ooohs and ahhhs when a kid skies an adult, or lays out to get a block, or zips past their defender to catch a goal, girls throwing to guys, guys throwing to girls, all wanting the same thing, to play with their friends. Thank you for letting us join in your conversations, and watch the discovery of your own magic during the foundational years of your lives.

To the Fryz of this season, thanks for the great year on and off the fields. Please continue to make ultimate memories, and I’ll continue to see you on the fields.

Thanks for a lifetime of memories. FR-YZ.

All photos on this site can be enlarged by mousing over the image and clicking.
We are a group of high schoolers who are passionate about ultimate Frisbee. The weather elements haven’t stopped us from practicing.  We’ve played together since the fall of 2008, through the winter in cold, rain, wind, hail, and snow and in extreme heat of 100 degrees.

We are a very diverse team including family structure, race, ethnicity, gender, religion, socioeconomic and education. Foremost our players are friends, hanging out and staying in contact with each other. 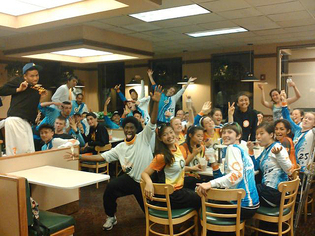 Team enjoying Frosties at Wendy's
Ultimate Frisbee players know it's a fringe sport with its own following. But it did have the biggest participation increase, almost 21 percent, among team sports in 2008, according to the Sporting Goods Manufacturers Association. More than 700 colleges have teams, and the finals of the USA Ultimate National Championships held at the Sarasota Polo Club in Florida were streamed live to 40 countries, drew 1,500 competitors on 60 teams from around the country that competed in four categories -- open, women, masters and mixed. (http://sports.espn.go.com/espn/page2/story?id=5755676)

Ultimate is a great family game, easy to learn, with the bonus of lots of exercise. Best of all, it's a non-contact sport, self-refereed and the principle of fair play “spirit of the game” and sportsmanship is paramount. Our belief is that the spirit of the game is more important than the final score.  The kids truly have fun playing Ultimate, and playing together as a team/family is what we all look forward to each week.
About Spirit of the Game: http://www.usaultimate.org/about/ultimate/spirit_of_the_game.aspx

Our team fundraises, by selling gear and baked goods, to help our own teammates who are on scholarship and need help paying for tournament entry fees, coaching, and uniforms. Our team is well respected in the community; two of our players have won the King 5 Athlete of the year award, and we have healthy family support. We’d like to be role models to the next generation of Ultimate Frisbee. 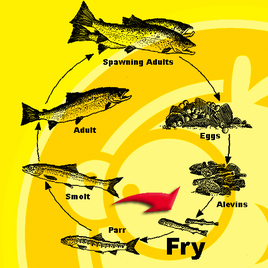 The life cycle of a salmon
Young salmon are commonly referred to as Fry.  We are still very young but someday would like to become the Sockeye of the future. (The Seattle Sockeye are one of the best Open Frisbee teams in the world.)